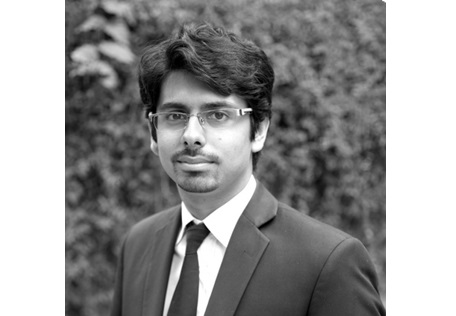 Sameer Khosa, an Old Aitchisonian, has been an Advocate of the High Courts of Pakistan since 2008. This brilliant young lawyer was called to the Bar at the Honourable Society of Lincoln's Inn in 2008 and admitted to practice as an Attorney-at-Law in the state of New York, USA in 2013. Presently, Sameer is in practice in Pakistan and a partner at Axis Law Chambers. He has also written for renowned publications including Dawn, The Nation and Friday Times.

In this interview, Sameer talks to us about his time at Aitchison and how it has influenced his personal and professional growth.

Please describe your academic and professional endeavours after Aitchison.

I was at Aitchison from K-1 till finishing my A-Levels in 2004. Then I went on to University College London, where I read law, and after completing my LL.B., I went to Lincoln's Inn for my bar. Then I came back to Lahore and worked for a couple of years before going to Columbia University, New York for my LL.M.

I was an Associate at Raja Muhammad Akram & Company with Salman Akram Raja before I went for my LL.M. I returned to Pakistan and became a Senior Associate with Salman Sahib. I have been a Partner at Axis Law Chambers since 2014, and currently practice there.

Oh absolutely - a ton of them! I have very fond memories of debating on the benches right outside Barry Block. The Aitchison College Debating Society (ACDS) would congregate there every afternoon and practise debates. We were at it for almost every day that I was in Senior School.

Another experience that I cherish is the privilege of having played cricket in the Main Cricket Ground. I remember Clive Lloyd once came in and sat in that dressing room. There was this surreal moment of realisation that I was sharing the same space as an absolute legend of cricket and I really could not believe how lucky I was to feel at home in the same pavilion as these giants of the sport.

What other co-curricular activities were you involved in?

I was primarily involved in debates - I represented Pakistan at the World Schools Debating Championship in 2004 in Stuttgart, Germany. Then of course, there was the cricket; honestly, I tried my hand at anything I could - declamations, theatre, GOA,  business and marketing competitions. The only thing that I wasn’t involved in was the Gig Night. I wasn’t a musician of any kind. My parents would constantly worry for my grades and would ask me to drop at least one activity. But I'd ask them to wait till my results came out and I’d usually do well enough to keep them happy so I could keep pursuing these other passions of mine.

When did you decide that you wanted to be a lawyer?

That's an interesting question. I remember having this conversation in A-Levels with my parents. I was confused between pursuing a degree in physics or law. But since I debated a lot at Aitchison and really enjoyed it, I decided to go to law school. I went in knowing that I would value having a law degree, but not quite sure if I wanted to actively practise law. At some point during the degree, and my first months as an Associate with Salman Sahib, I really began to enjoy being a lawyer, solving problems, being challenged, and thriving in the high-stakes environment of the legal field, and that is what has really kept me in this profession. However, while I am happy with the choices I have made, I really do wish there was more time in life to do other things – I can’t remember the last time I was able to read a book, cover to cover, uninterrupted!

Did you have any favourite teacher?

I had lots of teachers who inspired and moulded me throughout my time at Aitchison. There was my K-4 Math teacher, Mrs. Abid, an English teacher Ms. Vanessa Francis who taught me through K-4 and K-5 - I remember Ms. Francis in particular because she taught us the difference between pronouncing our Ws and Vs, and that’s something that has stayed with me my whole life. In Prep School, there was Mr. Patrice Fouquet who taught us French. In Senior School, which I think was the most life-changing period of my school life, there was Ma’am Naila Burney, who despite having never taught me, I had great interactions with through her involvement with extra-curricular activities. Ultimately, during my time at Aitchison, it was my O-Level Geography teacher (and if I remember correct, the A-Level Extra-Curricular Activities Co-ordinator), Ma’am Rabia Mansoor, who was an absolute rock for me – there to help every step of the way and easily a driving force behind any accomplishments I had at Aitchison, and in particular making it onto the Pakistan Debating Team.

Were you a boarder?

I was never a boarder but I had a lot of friends who were boarders. They had shifted the school timings while I was there and we had to be at school till 4 or 5 pm but couldn't go home and then back again for sports. So for those two hours in between, I would have lunch in the boarding house. I have very fond memories of being there and having lunch while waiting for sports.

Is there anything that you believe distinguishes Aitchison from other schools in Pakistan?

Yes, a lot. I think that having such a huge space in a city like Lahore for children to be able to explore themselves when they’re growing up is a huge advantage. And even though you could get up to a lot of mischief, at the end of day, you’re within a set of walls that provide a safe space for you. So, it is an incredible privilege and advantage for children to have that kind of physical space to be able to avail themselves of all the amazing facilities that the school has to offer. I think that is what enables an Aitchisonian to have a sense of being an all-rounder. They don't have to seek these things out from other places. They have it all at their school.

What kind of impact, if any, has Aitchison had on your professional or personal journey?

It’s had a huge impact! Whenever two Aitchisonians meet each other, there develops a different level of connection between them, even if they’ve never really known each other from their school days. That underlines the kind of connection that everybody shares at Aitchison.

My association with Aitchison has had a profound impact on me, and my perspective on my time there has evolved with the years.  I think that when I was actually a student at Aitchison, the immediate impact was the realisation that I studied at a good educational institution, which would help in getting into a good college, attaining a satisfying professional life, and so on and so forth. But as I’ve grown older, I’ve come to acknowledge and recognise that the fact that this disparity exists, with such privilege available to a few, is not necessarily a good thing viewed from a wider perspective. So I view the privilege that this kind of educational opportunity affords now with a sense of accompanying responsibility that comes with it, to not only make something of myself, but to work in extending such opportunities to the rest of Pakistan. Basically, my Aitchison experience continues to inform how I think about and view the world.

Is there any academic or professional achievement that you are most proud of?

I worked on the Asghar Khan case with Mr. Salman Akram Raja and I think that was an incredible case to work on. The Asghar Khan case is essentially a case where in the 1990s it was alleged that the 1988-90 elections were rigged by the Intelligence Services in favor of Nawaz Sharif. The case had been lying dormant for about 15 to 16 years, before it was taken up. We got involved and started working on it. It was an incredibly fulfilling experience to go on that journey with Salman Sahib and work on a case that felt like it would have immense national importance.

The other thing that I want to talk about is not something that is not particularly glamourous or part of water-cooler conversations in Pakistan, but it is something that made me feel very gratified to be a lawyer. We argued this case, wherein we challenged the constitutionality of a tax that had been levied. As I was sitting with these four business owners, just decent people trying to do their best, I had this strange and gratifying feeling that I was literally the one person standing between them and bankruptcy, because of a particularly discriminatory tax that had been levied just to put these hardworking people out of business at the behest of rival businesses. So working on that case and then winning it was a great feeling. It was a good way to realise that what you do has a direct and immediate impact on people’s lives which is the most satisfying aspect of being a lawyer.

Any advice for present Aitchisonians?

Work hard, but nothing that happens now is really the end of the world. So, work very hard because it maximizes your potential, but don’t ever be disappointed. Just always have a perspective and never just work for yourself. Try to do something for yourself and for people around you.